With Thanks to Soldiers I Have Known

This was originally posted in 2009…but it bears repeating… 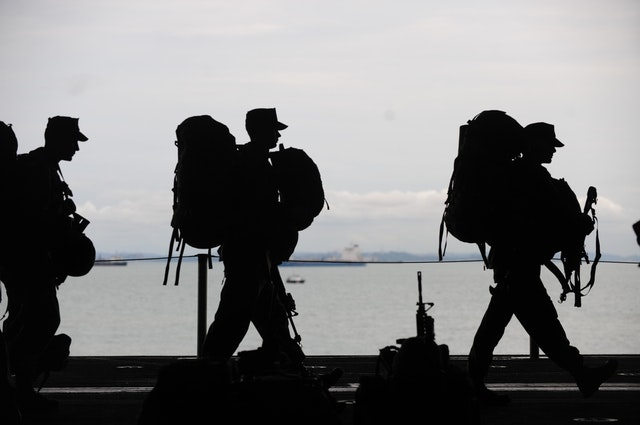 I write this today, and you read this today, because millions of American soldiers, engaged in various battles that spanned over more than two centuries, fought for the cause of freedom.

I have had the privilege of knowing some of these men and women. They are regular, everyday working people, paying their bills and raising their families. They don’t consider themselves special.

They will, without exception, tell you that they were just doing their jobs during those times when they risked life and limb to protect us.

I have known my wife’s Uncle Nick for over 35 years. A great guy, a retired automobile salesman, Nick has always been a fun guy to know. We get to see each other at least once a year at a Labor Day family reunion, and I have always enjoyed sharing some laughs with him.

In all that time, I never knew he had been in the military.

Last summer, my wife and I were visiting at Nick’s new home in Greenwood. He was gone at the time and his wife, Aunt Marilyn, was giving us a tour of their new place.

I noticed a plaque hanging on a wall in the hallway. On one side was a black and white photo of a trim young Uncle Nick in a United States Marine uniform. On the other half of the plaque was a print of the famous WWII photo of the Marines raising the US flag atop Mount Suribachi on Iwo Jima.

I mentioned to Marilyn that I had never known that Nick was in the Marines. “Oh yeah,” she replied, “He was all over the Pacific back then. He went to Guam and Tarawa and Iwo Jima and a few other places.” She mentioned it so casually, it almost sounded like a cruise itinerary.

I was astounded. How could I have known this man for all those years and have never heard about this?

“He doesn’t talk about the war much,” Marilyn said, “Except when he gets together with his old Marine buddies.”

Guam…Tarawa…Iwo Jima…those were some of the toughest, ugliest battles in a tough and ugly war. No wonder Nick would only talk about this with people who had been there. Only a fellow soldier could empathize with those kinds of scarring memories.

About that time, Nick returned home, and I told him I wanted to thank him for all the sacrifices he had made for this country. He waved his hand dismissively and said, “We all just did what we had to do. Everybody made sacrifices.” I couldn’t think of anything else to say, so I dropped it.

This incident with Nick occurred within a few months of me seeing the Clint Eastwood film about Iwo Jima, Flag of Our Fathers, and also the television debut on PBS of Ken Burns’ WWII documentary, The War.

Those images of the suffering of American soldiers were fresh in my memory, and I tried to envision what that frightening time must have been like for Nick and his fellow Marines.

I’m a life-long civilian who has never had to worry about anyone shooting at me. I cannot imagine the bravery of soldiers who answer the call to go to war.

For lack of a better idea, I decided to write Nick a letter and express my appreciation. I hope I am not embarrassing him, but this is what I wrote:

Ever since the day at your house when I found out you were a Marine in the Pacific during the war, I have been trying to think of some way to properly express my gratitude and admiration for what you and your fellow Marines have done for this country.

I cannot find the words.

I know you will say, “We were just doing our jobs.” And that is true, to some extent. The whole country was dragged into war after Pearl Harbor, and everybody made sacrifices.

But you Marines really did the heavy lifting, especially in the Pacific. I have read enough history to know that the campaigns you fought in were some of the toughest in the war. You guys were a bunch of kids rushed through boot camp and sent halfway around the world to engage an enemy that would fight to the death. I cannot imagine the hardships you suffered and the obstacles you overcame.

Over the past few years I have read and viewed a lot of material concerning WWII. Especially after seeing a movie like Flag of Our Fathers, I was just overwhelmed by the ferocity of the combat and the grueling conditions our troops endured. The whole Pacific campaign was a tough, dangerous job that had to be done, and you guys did it.

I have always liked you, Nick, and I am amazed that I could have known you for all these years and have never been aware that you were part of such an elite group. You are now officially added to my list of Top Ten Most Admired People.

This country owes you and all the other good men who served with you a tremendous debt of gratitude. Because of your generation’s perseverance and sacrifice, we are all free today, living in the greatest, most blessed nation in history.

Please allow me to say “Thank You” and “God Bless You” to you and all of the men you served with. You did what had to be done to defeat an evil empire that would have enslaved the world if it were possible.

I thank God every day that I live in America, and I thank him for people like you who sacrificed so much to keep us free. I am honored to know you.

About a month later, I opened my mailbox to find one of the nicest letters I have ever received. Nick had written back to thank me for my letter. I trust he will forgive me for sharing it, since his note speaks volumes about the attitude of the greatest generation:

I too, thank God I live in America. I do appreciate and thank you for your letter. It certainly means a lot to me to know there are still people who remember what sacrifices were made back then.

I consider myself fortunate to be related to just one person who is thoughtful enough to take time to write such a meaningful letter. It brought me to tears.

Thank you again for being so thoughtful and caring enough to write me.

Uncle Nick and his generation have bequeathed to us blessings of liberty and prosperity that most of the world can’t imagine. Everything we have in this country we owe to God’s grace and the sacrifices of our armed forces.

If you know a vet, take time to thank them for their service. It is the very least that we can do, and it is the thing they will appreciate the most.

God bless all of you who have sacrificed so much to protect us.

Thank you for doing your job.

I help small business owners produce email promotions, newsletters, and websites. Save yourself time, money, and aggravation. Get results with affordable local marketing tailored to your needs. Visit http://www.oceanbreezecopy.com for more info.
View all posts by David Smith →
This entry was posted in Family, Society & Culture and tagged gratitude, sacrifice, soldiers, veterans. Bookmark the permalink.

This site uses Akismet to reduce spam. Learn how your comment data is processed.